I’m having trouble understanding why driving two or more of my generic chinese brand 18w LED downlights in series results in the LED driver shutting down due to overload, while the driver should meet all the requirements to do so.

The equipment I’m trying to get working are

Driving a single lamp at ~320ma current works fine, and so does driving two lamps in parallel at ~640ma current. 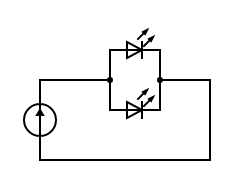 I measured the voltage to be ~56V when driving at the nominal current, so in theory when two lamps are in series it should be around ~112V?

When connected in series, the voltage goes straight up to 240V+ (my cheap meter showed up to 244V) after which the driver shuts down due to overvoltage (blinking once in a while to see if the overload situation persists). 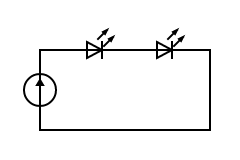 I also took one of the lamps apart, the lamp itself is just flexible strip of SMD2835 LEDs connected in 5p18s layout (so 90 LEDs total), nothing fancy there.

Why drive in series?

While driving the lamps in parallel works, my understanding after some researching on the internet is that it’s generally not recommended to drive constant current lights in parallel. Though, the driver manufacturer has some examples with the lamps wired in parallel, so perhaps it’s not as bad as I understood?

There is still one downside though, I’m limited to just 3 lights when driving in parallel if I want to drive at the rated 300ma current, while in series it should in theory be possible to drive up to 4.

My best guess (as pretty much a total novice to electronics) would be that the flexible LED strip itself can’t handle the higher voltage needed to drive the two lamps in series, essentially shorting the circuit and thus the driver supplying the max voltage before shutting down.

I’ve pretty much come to terms with the that my only option is to drive them in parallel if I want to use the equipment I already have, but at least an explanation why this is happening would be great.